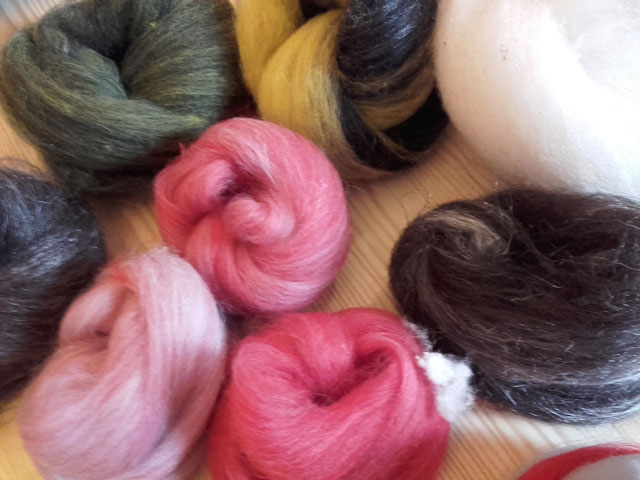 Saturday 16th June 2018, at Mungrisdale Village Hall was once again a hive of activity as we were shown how to colour-blend on a drum-carder.

Visiting tutor Freyalyn Close-Hainsworth travelled from West Yorkshire to demonstrate another of her many fibre skills – this time blending wool and other fibres on a drum-carder to produce colourful, airy batts ready for spinning. Eleven Guild members participated, including three members from Tynedale Guild.

Freyalyn began by explaining how to clean and care for the drum-carder, and the need to start with good quality fleece “grotty fleece cannot be turned into beautiful”, she said. The fleece should always be washed and dry as once grease gets onto the drum it cannot be cleaned off and any moisture will rust the tines. She began by loading fibre on to the drum, opening it up as she placed small pieces on the tines. “Load as much as you can,” she said, “but you need less than you think!” Once loaded, the handle was wound very slowly a few times – it is very important not to over-card as very quickly the fibres will break and produce neps – undesirable lumps which will then make lumpy, bumpy yarn. Freyalyn illustrated the folly of over-processing fibre by splitting the batt and re-carded half, then splitting it again and re-carding half – the fibres had begun to snap and were clinging to the licker. Neps were evident in the over-carded batt which now felt decidedly less springy.

To remove the batt from the carder, Freyalyn advised standing end-on to the drum-carder and, using the doffer, peel off the batt in one piece. She then gently opened up the batt with her hands and placed it in the feeder for a second carding. It is important not to hold back the batt while feeding it in, as it will start feeding around the licker drum – which is there only to catch short bits and second cuts. Winding the handle should be a quiet, easy action with no straining. All the different colours should be drum carded to the same airiness before going on to blend together.
Besides learning how to get the best out of our drum-carders, we were able to try several different brands and understand their different capabilities and the usefulness of different tine sizes.

Freyalyn showed us how to rescue a space-dyed roving of Merino which had been kept too long and become a bit felted. She opened it up slightly by hand and placed it on the large drum while winding the handle very slowly. Merino is a fine fibre with not much body, she explained, so you can pack on more. Once doffed it was already obvious the fibre was airier and a better blend, although neps were beginning to form. She then split the bat and fed through half at a time. The result was a beautifully soft batt which would now be easy to spin.
Freyalyn then showed us other blending methods. To make a striped batt, all the components must have been drum carded to similar textures. Split off a narrow strip of black and feed it in one side of the drum, then feed in a narrow strip of yellow, slightly overlapping the black. Repeat the process until the whole drum is covered. The resulting batt is well-combined but striped.

To produce various shades of pink, Freyalyn placed pieces of red fibre on the large drum, doffed it then passed it through the feeder and doffed again. She did the same with some pale blue Merino. The two batts were now of the same weight and density. She then split each bat into eight and combined the two colours in various ratios e.g. ¾ red to ¼ blue. The pieces were passed through the feeder, doffed, split and re-fed. By combining different ratios of blue and red, Freyalyn showed how various shades of redness could easily be produced.

Freyalyn then demonstrated how to handle cotton fibres – which are very short and therefore have a tendency to catch up on the licker. To open up the cotton fibres, she placed pieces on the large drum and wound the handle extremely slowly so that the licker did not grab it. The cotton batt was doffed and two batts of Merino were produced in a similar manner. The three batts were then re-fed into the drum-carder in sequence – Merino, cotton, Merino – and doffed. By sandwiching the cotton between the layers of Merino, then pulling off chunks and spinning sideways, the resulting batt of fibre was easier to handle. Similarly silk, sparkly fibre and any other difficult fibres can be tamed by sandwiching between wool fibres.

The most important lesson we learned was three-fold: apply fibre thinly to the drum, don’t put too much onto the drum-carder at once and don’t over-card – the handle should always wind with ease and very little noise! By applying Freyalyn’s knowledgeable advice, and by restraining ourselves from the temptation of adding too many layers of fibre, some beautiful, airy batts were produced, ready for spinning into yarn at our next month’s meeting when Janet Renouf-Miller will show Guild members how to spin “fancy yarns”.